I read today that’s in almost certain that Masterson will do the first (maybe second) start as a 5th starter and Brad Penny would take over. After this, Masterson should go back to the bullpen. This link is from Boston Dirt Dogs, they had a poll and the fans want Smoltz and Penny to be 4th and 5th by June 1st, leaving Wake out the rotation and Buchholz in AAA.

The position for the 5th starter spot is always a problem. Usually you’ve got two guys which are both borderline Major League talented.

But the Red Sox have another kind of problem around the 5th starter spot. They’ve got too many good guys! The first battle is between these two guys:

Clay Buchholz has a very nice Spring Training allowing just one run in 19 2/3 inning (0.46 ERA). So it looks like it’s obvious that he’ll be the 5th starter, but in this case it isn’t that easy. He struggled last year as the 5th starter going 2-9 with a 6.75 ERA in 76 innings. He’s 24 years old, so it wouldn’t hurt keeping him a year longer in Pawtucket (AAA).

Second guy for the competition: 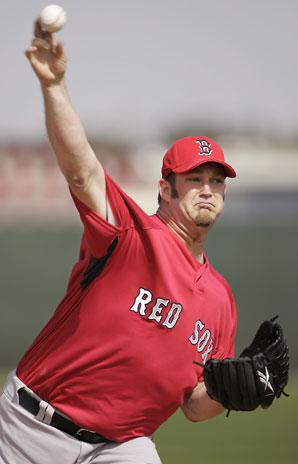 Brad Penny, acquired from the Dodgers via free agency this offseason. He’s coming of a bad year, especially for his standards. He had a 6-9 record with a 6.27 ERA in 94 2/3 innings. Better than Buchholz, but still pretty bad. One reason why he threw bad last year was a heavy shoulder injury, because of this injury he started later this Spring Training throwing in games. He maybe isn’t ready by opening day, so in that case Buchholz maybe gets the nod. But don’t be surprised Penny takes over in a week or so. Penny had a very good year 2007, going 16-4 with a 3.03 in 208 innings. He’s 30 years old.

And to make it even tougher a third pitcher will be in the mix coming June:

Lifelong pitcher from the Braves, John Smoltz is currently rehabbing from an arm injury. At first he tried to be back on June 1st. The latest reports say he could be back by mid-May. Last year he had an 3-2 record with an ERA of 2.57 in only 28 innings. Smoltz has been one of the most dominating pitchers of his era. He can also relieve, but that probably won’t be the case this year. He’s 41 years old.

In my opinion will Brad Penny the 5th starter. Come May/June Smoltz will either step in for a injured pitcher or for Penny/Wakefield if they’re doing terrible. Buchholz will be a nice back up waiting in the wings to step up when needed.

What have Matsuzaka, Okajima, Saito & Tazawa all in common? Not a difficult question, they are all Japanese and they play for the Red Sox (organization). But what are the differences? Matsuzaka is the biggest star of the four, he’s the only lifelong starter and has won the WBC MVP award twice. Okajima is the only lefty of the four. Saito has been the only closer (he will be set-up man now). And Tazawa is the youngest and has never played in the Nippon Professional League (Japanese Major League).

I think they all will have nice years. Pros and Cons:

* Going in his third year for the Red Sox, Matsuzaka is used to the clubhouse and the organization, he’s matured and will be a nice leader.

* Winning the WBC MVP award will give him a boost to perform even better.

* With Saito in town, he has it’s easier for him to make friends and be happy.

* He hasn’t lived up to the hype just yet, the pressure will be big.

* Same as Matsuzaka, third year for him so is more used to the environment.

* With Saito and Ramirez with the Sox, he isn’t the only set-up man. The pressure will be less and so is the work load.

* Because he gets older, he may burn down easier or will get injured easier.

* He’s experienced and the players in the American League East don’t know him well. So he could make an impact there.

* He isn’t the only bullpen guy on who the club has to rely on, less pressure.

* With two other Japanese players and Brad Penny around him, the comfort level will be high.

* Coming off a serious arm injury, which required TJ surgery if he was younger, time will tell if he can stay healthy down the stretch.

* The young player will start at Portland probably. After his strong spring performance, I see him dominating the AA players. He will be promoted to Pawtucket and he may get a call down the stretch to relieve for the big league club.

* He hasn’t played in the regular season against professional players yet, so he may get confidence problems

* He needs to get used to the bigger ball.

At first I want to tell you that this is my first blog. I signed up yesterday, with the feeling I could write some interesting stories. You only have to know two things about me, first: I’m dutch (so don’t be to hard on me in spelling), and secondly: I’m a huge Red Sox fan.

I’m going to tell a bit about Mike Timlin. He, ofcourse, isn’t with the Red Sox anymore. He’s 43 years old now and he can’t throw as good as he used to throw. His lightning fastball is gone with the wind. The last couple of years his ERA went up and so did his age.

He hasn’t signed with a team yet and I think it’s better for him to retire. He would have a honourfull goodbye instead of a couple bad years so no one could remenber the great Mike Timlin. These are my words to Timlin: You helped us great old man, I only have to say 2 years: 2004, 2007. You’ve won 3 championships (one with the Blue Jays) now, more than the most people can say. So enjoy your retirement and be with your wife and kids.